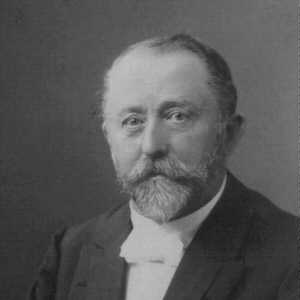 The company, F. Ad. Richter & Cie ., makes a very interesting study in itself.  Richter was born in 1846 in Herford, Nordrhein-Westfalen, the son of a master baker.  He quit high school to go to work for a druggist.  While still in his teens, he put the following advertisement in the paper: "An infallible way to become rich will be given to everyone who sends a dollar. Richter".  Within a short time he had several hundred dollars.  He responded with a post card with the message: "Do the same.  Richter".  Note: This ad is well documented, not some urban legend.  And for those who question "a dollar" --  the Thaller was a coin in rather common circulation.  It was equal to 3 Marks and was the same weight of silver as many other coins of the era, including the British crown and the US dollar.  Because the value of money was inherent in its metal content, not who coined it, these coins were universally accepted.  Few cared who had minted it.  During W.W.I the British debased their currency -- to 40% silver from "sterling".  Within 50 years "money" totally disappeared, only "tokens" remain.

In 1868 he was employed as a sales clerk in Duisburg; by early 1869 he had opened his own store.  Richter believed in advertising, so his rise is easy to follow and prove with documents from the era, such as newspaper advertisements.  Within a month he was selling 'medicines', using his druggist experience.  Patent medicines were popular in the USA, as in Germany.  Due to the lack of drug laws at that time, the "pain killers" used in Richter's medicines were quite effective.  Even though his medicines might not 'cure' you, they did make you feel better.  For example, his factory was a major consumer of coca leaves, from which he extracted cocaine.  In 1869 he applied for the right to sell textbooks and was granted the whole book marketing concession.  Imagine the surprise of the 'authorities' when he opened his own printing establishment and hired street vendors to sell the textbooks.  He also used his printing establishment to print up labels for his products and advertising and publicity brochures and even books of flattering endorsements.

Needless to say, his competitors did not like either his success or ambition.  They advertised against his medical preparations and even managed to get the new German Empire to pass a law in 1872 limiting the sale of medicines to pharmacies.  Although this law was poorly enforced, someone as successful as Richter was not going to be overlooked and was soon forced out of business.  Richter sold out and left Duisburg in 1873.  He tried a few other places, like Nijmegen (Netherlands), Leipzig and Nuremberg.  Soon he stopped selling out when he was forced out of a city.  His Lebkuchen factory in Nuremberg became the quality manufacturer of cookies and cakes in Germany; his printing establishment in Leipzig quickly became a leading textbook and teaching aid supplier.  Richter believed in selling quality goods.  In 1875 Richter purchased a Doctor of Chemistry degree (back-dated to January 30, 1873) from the nonexistent University of Philadelphia

But Richter needed a "home" for his most profitable business, patent medicines.  To escape the pressures of well connected pharmacists and doctors, he obtained permission  in 1876 from the local Prince of Schwarzburg-Rudolstadt to build a factory.  Not to be outflanked, Nuremberg druggists arranged for Richter to receive an official notice just before opening his plant in Rudolstadt that, although the manufacture of drugs was legal, such products could not be sold to the public (except through pharmacies).  Richter evaded the law for several years by selling his products to a non-existent pharmacy in Roda, Saxony.  In fact, his medicines were sold mail order, which had become a preferred way of buying medicines during the Franco-Prussian War (1870).  By the time the Nuremberg pharmacists managed to prove that the Roda pharmacy was a fraud Richter was the by far largest employer in Rudolstadt, employing over 200 workers in a city of 8,747.  No one in authority in Schwarzburg-Rudolstadt saw any reason to challenge Richter's business practices.  Richter had found (created) a "home".  In fact, he built his house (soon torn down and rebuilt even bigger, but moved over to allow for factory expansion, in 1886-8) right next to the factory.  During the communist (DDR) era it was claimed that he built his house next to the factory so he could lord his wealth over his workers.  But the reality was that the factory supplied hot and cold running water, steam heat, telephone, electricity and sewage -- none of which were available in the city of Rudolstadt at that time.  Even today, the Heidecksburg, the castle of the prince, does not have electricity.

The technique of manufacture of Anchor building stones was acquired from the Lilienthal brothers in 1880.  The music box and gramophone business were started, based on the acquisition of the Libellion rights by the teaching material branch in 1894 or 95.  (Today Richter's music boxes and gramophones and Anker records are much sought after collector's items.)  This division, as were many others, was sold shortly after Richter died in December,1910, and is today one of the founding elements of Deutsche Grammophon.  Richter moved both the block business and the music business to Rudolstadt, which moves were more an indication of his own personal interest than of any business decision.  Clearly Richter was very comfortable running a giant, multi-division, multi-city, multi-country enterprise.  In addition to the products already mentioned, Richter was famous for the best chocolate (also cocoa and hard candy) in Germany and made soap, laundry and bath products, and sold a line of "health foods".  In addition to the factory, he built and operated a health spa, Rudolsbad, from 1884 until taken over as a hospital during W.W.I, on the factory grounds.  The hotel adjoined a park, Rudolspark, over 150 acres (60 hectares).  The factory had its own railroad station and private rail siding.  To understand a health spa in the middle of a factory complex, one must remember that a major part of the attraction was the high level of "modern" services.  Steam heat, all electric lighting, hot and cold running water, each room with a full private bath and telephone -- all combined to make Rudolsbad a 20th century hotel in the 19th century.  Richter bragged that he paid the highest wages in all of Schwarzburg-Rudolstadt.  His workers also received such benefits as a subsidised canteen, free health care, coffee breaks and paid vacations.  The Rudolstadt factory employed 649 people in 1910 (Rudolstadt had grown to 12,937) when he died, but only 458 in 1913.  In addition all non-Rudolstadt assets (except Vienna) were liquidated or confiscated (USA and USSR) over the next ten years.

Clearly Richter was a modern businessman, in every sense of the word.  When he died in 1910 he was one of the ten richest men in Germany.  But within ten years his heirs were broke.  There had been some confusion about exactly when Richter died, but thanks to the Internet the truth is now known.  His obituary claimed December 22, 1910.  Other secondary sources claimed December 25, 1910.  The death registration in Jena proves that Richter died about 9:00 PM on December 25, 1910, at the Privatklinik Herford in Jena.

As I am always telling people -- far more than you ever wanted to know about Richter or his company.